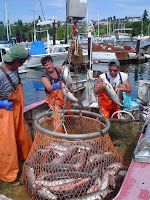 
ABSTRACT: This article reviews methods used in the increasing use of fishers’ knowledge in contemporary fisheries management. During the last one hundred years, fisheries science has been used extensively to inform management decisions for the regulation of sea fisheries. However, the decline of many fish stocks has cast doubt on the sufficiency of fisheries science, and has led to demands from fishers that their own expertise—fishers’ knowledge—should be taken into account in decision-making. In this article, we examine four case studies of such attempts to take account of fishers’ knowledge in the management of North Sea fisheries, comparing their different methods of identifying and using fishers’ expertise, and assessing their respective outcomes. Our conclusion is that the value of fishers’ knowledge improves according to the extent to which the method of obtaining it is participative and interactive.


Introduction
In most fisheries in developed countries around the world, a leading part is played by fisheries science in management decisions that regulate them, partly because the marine ecosystem is highly complicated, requiring scientific research to understand it, and partly because politicians need scientific advice to bring closure to otherwise endless debate on the need for particular regulations. However, the role of fisheries science has come under scrutiny in recent years because of declining fish stocks, and the scientists’ methodology has been challenged by fishers who claim that their own expertise has been ignored (Rossiter and Stead 2003). This distinction between fisheries science and fishers’ knowledge reflects a broader distinction between scientific ecological knowledge and traditional ecological knowledge, which has been characterized by some scientists in a pejorative contrast between the objective, neutral, rigourous and systematic character of modern science, and the subjective, value-laden, flaky and anecdotal character of traditional, indigenous folklore (Gray 2002). Fishers reject such pejorative characterizations, and claim that the scientists’ conclusions are fatally flawed, because, for instance, their surveys are conducted in the wrong areas, and their data is outdated. In an attempt to overcome these divisions, since the late 1990s, there has been growing interest in finding ways to involve and engage fishers in the management process. This has led to researchers from natural science disciplines (for example in the International Council for the Exploration of the Sea (ICES—the oldest intergovernmental organization in the world concerned with marine and fisheries science working groups) working with social scientists in applying well tested social-survey methods to elicit information such as fishers’ perceptions of the relative health of fish stocks.

In the following case studies, this article will examine and evaluate four different ways of obtaining this indigenous information on North Sea fish stocks. But first, the methodologies of the case studies must be clarified. The range, richness and potential utility of indigenous, local and resource users’ knowledge has been emphasized by many publications in the naturalresource governance literature. Fishers possess many different types of knowledge which may be important to fisheries management, and there are many ways to classify such knowledge. For instance, much of the initial literature focused on fishers’ knowledge of the ecosystem (hence the commonly used term local ecological knowledge). However, fishers also possess intricate knowledge of social, economic, technical, behavioural or even political aspects of fisheries. This knowledge is clearly relevant for management with the increasing realization that fisheries management, far from being exclusively about fish biology, operates within a complex system with social, economic and ecological dimensions.

The methods used to derive fishers’ knowledge determine whether information is gathered in a quantitative or qualitative form. Some knowledge is naturally quantitative (e.g. the number of boxes of fish landed on a typical day), while others may be forced into a quantitative form during the process of formalization (e.g. asking a fisher to estimate the percentage change in a resource). Qualitative methods allow knowledge to be recorded as text, arguably more accurately capturing the richness and depth of fishers’ knowledge. However, this usually precludes statistical analysis and straightforward integration with (typically numerical) scientific knowledge. Some initiatives simply collect data from fishers in its raw form (e.g. landings data), while others collect perceptions (e.g. thoughts about the status of a fish stock). Data are collected or observed by fishers and passed on with no interpretation by the fishers. Perceptions, on the other hand are accumulated through time from experience and information networks and are the result of fishers’ mental processing of data, which is informed by their own prior knowledge, theories and instincts. Although several projects exist to collect data from fishers (e.g. official EU logbooks, the Dutch F-Project), all the cases examined in this article are involved in engagement with fishers’ perceptions.

We define three levels of perception: state-ofnature, process and management perceptions. First, perceptions may be about individual states of nature, such as abundance of a particular fish species. Second, fishers hold perceptions about the processes which lead to fisheries’ dynamics, such as causative links between parts of the marine ecosystem (e.g. the impact of a predator on a fish stock). Third, fishers have perceptions about how such ‘state-of-nature’ and ‘process’ perceptions relate to appropriate management of fisheries (e.g. whether decommissioning of fishing vessels is an appropriate response to declines in cod abundance). Such ‘management perceptions’ are related to the former levels of perception but also to a fisher’s worldview and normative positions on such issues as equity, rights and responsibilities to nature. The four case studies examined here have four different methods of obtaining fishers’ knowledge relating to a range of approaches. Extractive approaches aim to collect knowledge and use it ex-situ, while participative approaches offer fishers the opportunity to actively participate in the process. In discussing the cases, we focus on the following questions:
1. What types of fishers’ knowledge are accessed?
2. What methodologies are used?
3. Are scientists using fishers’ knowledge to inform management in a meaningful way?

Aim
The NSSS was initiated by the fishing industry in 2000, to provide an opportunity for fishers to have an input into the scientific stock-assessment process, letting scientists hear about the fishers’ views on the abundance of individual fish stocks experienced on fishing grounds.

Methods
The information is collected by a structured questionnaire, translated into each national language and distributed via national fishers’ organizations in Denmark, Belgium, the Netherlands, Scotland and England. The anonymous, closed questionnaire collects views with simple tick-boxes (using a five-point scale of: Much less, Less, Same, More, Much more) and one final comment box in which respondents can add any further information or views.

Types of Knowledge
The questionnaire focuses on ecological knowledge (stock health of eight key demersal—fish that live on or near the sea bottom such as cod (Gadus morhua L.)—species) but also collects basic technical data (boat size, fishing gear used and areas fished) and some perceptions of economic
conditions, relative to the previous year, covering difficulties in obtaining or retaining crew, operating costs, profits and optimism about the future. Quantitative data are not requested, only the perspectives of fishers according to semiquantitative scales. All of the knowledge is at the level of simple descriptions of the current state of nature or perceived trend since the previous year. No questions ask about the processes causing these changes or appropriate management responses.

Results
The spatial patterns of fish abundance apparent in questionnaire responses largely agreed with indications from scientific trawl surveys and assessments on spatial patterns of stock abundance. For example both the questionnaire responses and scientific surveys, indicate an increase in cod abundance since 2003 in the north and northeast North Sea, but no persistent trends in the western, central and southern North Sea (ICES WGNSSK 2006:).

Outcomes
Although the relevant ICES stock-assessment working group consulted and commented on the results of the NSSS, its comments were not used directly in the stock assessment. In the assessment report (ICES WGNSSK 2006), only sixteen lines are addressed to the NSSS in fifteen pages of discussion on cod, though this may be because, at the level of knowledge collected (state-of-nature only), perceptions of fishers, scientists and managers are similar, particularly in the all-important case of cod, on which all are in agreement that stocks are currently particularly low.

Issues
Three issues arise out of the NSSS. The first issue is about the reliability of the survey, because there is a suspicion that some fishers may have inflated their perceptions of fish stock trends in the hope that this might lead to increased quotas. Also, the results of the NSSS are difficult to interpret because of their qualitative form. The second issue is about the relevance of the survey, in that the basic dispute between fishers and the current management is about the processes which are causing, for example, cod populations to remain low (process-level perceptions) and, more importantly, what the appropriate management is (management perceptions), whereas the NSSS only collects state of- nature knowledge. Fishers insist that the lack of recovery of cod stocks is not caused by over-fishing but by natural processes such as climate change or seal predation, so that the further decimation of their fishing industry is unnecessary. ICES scientists generally agree that external factors affect cod abundance, but management advice issued by ICES and actioned by the European Commission concludes that it is necessary to cut fishing effort in an attempt to reduce cod mortality and allow stock recovery. The NSSS does not directly relate to this fundamental controversy. The third issue is about the problem of managing expectations: fishers are filling in the survey in the hope/belief that it will benefit them in terms of better quota allocations or management measures more agreeable to them. But lack of clear evidence that the NSSS results are feeding into the stock assessment, and the continued implementation of catch restrictions, led to a lack of motivation for fishers to complete the survey (of three hundred questionnaires distributed in Scotland in 2006, only forty were completed).

Email ThisBlogThis!Share to TwitterShare to FacebookShare to Pinterest
Labels: Anthropology