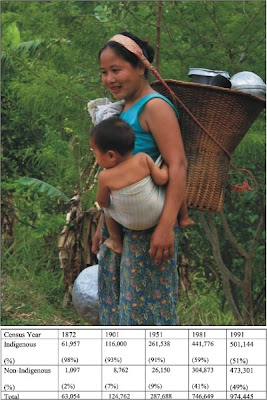 The terms "indigenous people," "indigenous ethnic minorities," and "tribal groups" are used to describe social groups that share similar characteristics, namely a social and cultural identity that is distinct from dominant groups in society.

Indigenous peoples usually live within (or maintain attachments to) geographically distinct ancestral territories. They tend to maintain distinct social, economic, and political institutions within their territories. They typically aspire to remain distinct culturally, geographically and institutionally, rather than assimilate fully into a national society. They self-identify as indigenous or tribal.

The situation of the indigenous people in the world is not encouraging. According to an estimate, there are about 370 million indigenous people spread across 70 countries. Individual groups practice their uniqueness, different from those of the dominant communities they live in. They are the descendents of those who originally took up habitation in a geographical location. Other settlers, who came through conquest, occupation, encroachment, or other means, gradually joined them.

Ultimately, when and where these intruders and occupiers became more dominant than the original population, the indigenous people were displaced and driven away from their ancestral homelands. Today, these indigenous populations throughout the globe, including Bangladesh, are facing similar problems and are fighting for their land and way of life.

Most indigenous people live in the rural settings of Chittagong Hills and in the regions of Mymensingh, Sylhet and Rajshahi. Most of the tribal people are of Sino-Tibetan descent, and have distinctive Mongolian features. These indigenous people differ in their social organisation, marriage customs, birth and death rites, food, and other social customs, from the people of the rest of the country. In the mid-1980s, the percentage distribution of tribal population by religion was Buddhist 44, Hindu 24, Christian 13, and others 19.

Each indigenous community, however small it may be, has a distinctive culture and heritage. The leaders from those communities express concern that those are fading away due to lack of government patronisation and aggressive activities by sections of local people. They complain that their rights are often violated both by the government and by Bengalis. These can be protected only if the government shows more awareness and sensitivity to indigenous causes and comes forward and take steps.

How the indigenous people were forced to lose their dominance in their own locality is shown in the table as a progressive decline of indigenous population in context of the total population in Chittagong Hill Tracts over a period of time (see table).

Problems faced by the indigenous population of Bangladesh may be categorised as follows:

In addition to facing discrimination due to their ethnicity, members of indigenous communities face hardship in education, employment, and everyday life.

All over the north of Bangladesh, indigenous people say they are concerned about what they call encroachment onto their traditional homelands by Bengali settlers.

Indigenous communities are mostly situated in remote, rural areas, where they lack infrastructure and access to larger markets.

Land reform and property laws have restricted some indigenous groups like Khasis at Moulvibazar or Garos at Modhupur, making their traditional occupations untenable. As they are mostly marginalised, indigenous and tribal peoples lack clout in national and even in most local governments, with the limited exception of local governments of Chittagong Hill Districts. Their interests and needs are often ignored by decision-makers. Years of discrimination have cast the indigenous people into poverty, thus further damaging their chances at empowerment and opportunities to improve their situation.

Bangladesh is a poor country. But, it may not be wrong to say that, with very few exceptions, Bangladesh's indigenous peoples are by and large the poorest among the poor. It cannot be denied that they face discrimination in education, employment, and civil rights. Decades of violence between indigenous-led insurgencies and government security forces in the Chittagong Hill Tracts gave rise to social tensions there which still persist despite the signing of a peace accord nearly ten years ago. Allegations of serious human and civil rights abuses against members of indigenous communities surface every now and then.

The diversity of our culture due to the presence of indigenous communities is providing extra vigour to the national fabric of Bangladesh. Moreover, indigenous people are the original inhabitants of our country. So, they have the same right we have over Bangladesh, if not more.

The newly elected Australian prime minister recently apologised to the indigenous people of Australia. Prime Minister Kevin Ruddtold parliament: "We apologise for the laws and policies of successive parliaments and governments that have inflicted profound grief, suffering, and loss on these our fellow Australians."

Should we continue to neglect our fellow Bangladeshis, the indigenous people, and continue not doing what should be done for them, and be compelled by our conscience to offer similar apologies in future? Would asking for apology in future absolve our irresponsible acts today?

Take your favorite Foods from hillhandicrafts.