On The Edges of Anthropology 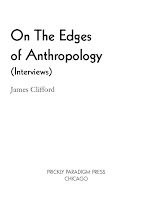 On The Edges of Anthropology (Interviews) by James Clifford.

Five interlocutors invite me to reflect on different aspects and moments of my work. Their questions provoke a kind of thinking-out-loud: ideas restated and revised, second thoughts. One interviewer is a Brazilian ethnologist who asks about my background as a historian and how I approach the history of anthropology. Another is a British cultural theorist concerned with site-specificity and the “ethnographic” turn in contemporary art. A third brings questions from comparative literature, and a Portuguese perspective on North American identity politics. An anthropologist from Hawai’i elicits my thoughts on decolonization and cultural change in the Island Pacific. A Japanese anthropologist, now working with Mayans in Guatemala, pursues similar issues in the context of contemporary indigenous struggles.

Interviews can reveal how one’s work emerges from particular times and places. Reading these second thoughts now, it’s apparent that during the years they address, 1970-2000, profound changes were underway. In the universities, newly diverse populations filled the classrooms; canons came under scrutiny; academic genres and disciplines blurred. And even in the relatively insulated intellectual milieux that I frequented, there was a pervasive sense of being displaced, undermined, provoked by world historical forces: unfinished business from the global “sixties,” social movements, new politics of representation and culture, the rise of neo-liberalism, novel forms of empire, communication, government and resistance.
Many stop-gap terms registered the changes: “postmodernity,” “late capitalism,” “globalization,” “postindustrial” society, “decolonization,” “multiculturalism,” “transnationality,” “the world system of
cultures”...

On The Edges of anth.pdf