MAN: AN INTRODUCTION TO ANTHROPOLOGY. 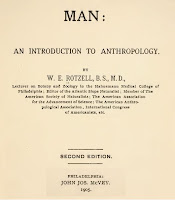 MAN: AN INTRODUCTION TO ANTHROPOLOGY.

THE first edition of this book, published in 1900, -*- has been out of print for some time. In this edition the same general plan has been followed; and, while there have been but few changes made, there are a number of additions. A new chapter has been added on "The Development of Culture" in which some of the views presented, I think, can not be found elsewhere. There are many excellent works written on zoology, treating of the various phases of animal life, some of them ending with, and others including, man ; but, beyond mentioning the different races of mankind, the majority of them have very little to say relative to the human species ; and, on the other hand, the many different books, so far as I know, written in the English language, treating of mankind, start out with the consideration of man as man, and make little or no reference to the zoological aspect of the subject, t. e., the zoology of man. There seems to be a break in our literature on this races, is the most suitable in a work of this character.

It will be noted that, apparently, the rule of from the lower to the higher has been departed from in the instance of the Red race in placing it between the Yellow and White races. The reason for doing this is that the affinity between the Yellow and Red races seems to be so close that we must consider the latter race to be dependent upon the former for its origin, and hence this arrangement. It might possibly have been well to have considered them as constituting a single race. In the sub-title of this work the word Anthropology is used in its most comprehensive and broadest sense, although much herein included belongs to that special field of anthropology termed Ethnology, which has for its consideration the relations of the different varieties of mankind to each other (Latham, Keane). The science of Ethnography, which is descriptive of individuals irrespective of their relationship to other peoples, is also necessarily touched upon. These terms are here mentioned for the reason that confusion continually occurs owing to the incorrect usage of them.

Many authorities have been consulted in the preparation of this work ; but especial obligation should be acknowledged to the Ethnology by Prof. A. H. Keane, The Earth and Its Inhabitants by Elisee Reclus, The Races of Man by Oscar Peschel, and many of the writings of the late Dr. Daniel G. Brinton. Acknowledgment should also be made to Prof. William Z. Ripley, of Columbia University, for certain suggestions of value which he very kindly made.