The transmission of Chinese medicine 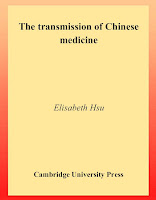 The transmission of Chinese medicine

This is the first time that an ethnographer has studied three different forms of medical education simultaneously. Conducting extensive fieldwork in Kunming in the People’s Republic of China, Elisabeth Hsu became the disciple of a qigong healer, who taught her his esoteric arts by imitation and repetition only. She also attended seminars of a senior Chinese doctor who plunged his followers into studying arcane medical classics, and she took the regular courses for Chinese students at the Yunnan College of Traditional Chinese Medicine, where the standardised knowledge of official Chinese medicine is inculcated. Dr Hsu compares these different medical traditions and shows how the same technical terms may take on different meanings in different contexts. This is a fascinating insider’s account, which brings out the way in which the context of instruction shapes knowledge. ELISABETH HSU is a teaching and research fellow in the history of Chinese science at the University of Cambridge. She has published in scholarly journals and is co-editor of Naxi and Moso Ethnography (1998) and editor of Chinese Medicine: Innovation, Convention and Controversy (forthcoming).

Chinese medicine is grounded in medical practice and in texts – in experience and in its transmission from one generation to another. It changes over time as its social and historical contexts change, but these changes do not occur uniformly. This book explores variations of key terms in Chinese medicine and examines ways in which they are understood in different social contexts. In particular, it concerns the extent to which the understanding and social significance of these terms depend on the way in which they are transmitted and learnt. Why should the understanding of specific concepts depend on the way in which they are learnt? Knowledge is generally assumed to depend on what one has learnt, regardless of how one has learnt it. This study contests the idea that there are contents of knowledge that can be transmitted and learnt regardless of how the actors involved, in their social relationship to each other, relate to knowledge. It shows that styles of knowing differ according to one’s perception of and attitudes to knowledge, and that the meaning of the same term may change as the ways change in which one perceives, expresses, uses, credits, orders, and applies knowledge. The underlying question in this book is thus how far the way in which one learns these terms determines the way in which one knows them or, simply, how different ways of learning relate to different styles of knowing.